Well, that was a lot of fun!

The Portable Camera Obscura had its maiden outing on Friday, touring some of the arts venues of Digbeth which were all putting on special events for the First Friday thing. We parked it up, pointed it at something interesting and turned confused glances into big grins when people saw the wonders within.

Thanks to all the people who had a go and the many who had thoughts and ideas about what we might do with this box on wheels. While we have a clear idea of what we want to do, it's all going to be driven by the support of, for want of a better word, the community, and that support felt pretty enthused.

But primarily this was our chance to test-drive the camera, to see if it actually worked in the field. As a camera obscura it worked perfectly, but we definitely need to speed up the build (2h30) and takedown (1h00). The wheels also turned out to have a fundamental design flaw and fall off unless you rotate the camera around every 100 metres or so. Push, then turn, then pull, then turn… But considering we knew nothing about building a barrow from scratch we're happy with how it went.

Weather permitting, the camera will next be out next Saturday during the National Photography Symposium at the Library of Birmingham (which, I hasten to add, we're not affiliated with and are just cheekily glomming on to, although Jenny is speaking at it on Friday), probably in Centenary Square. As before, watch the Twitter for updates.

And so, here are some photos we took on Friday. If you took any photos yourself, please let us know as we really didn't take enough. 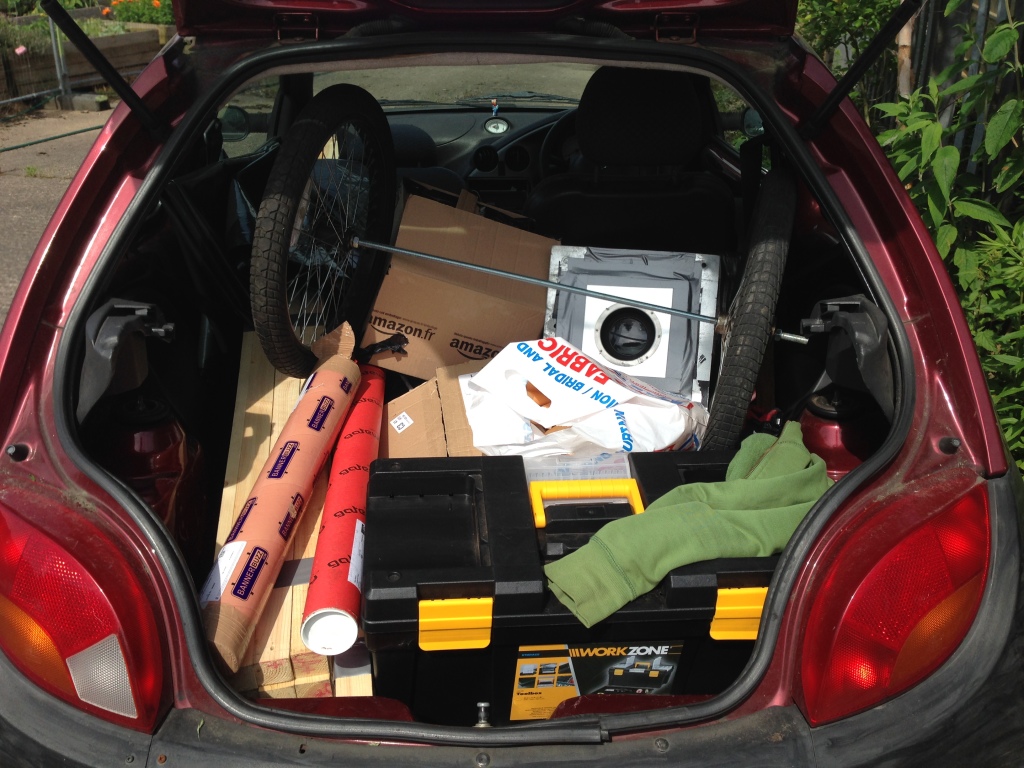 There's a camera in there somewhere… 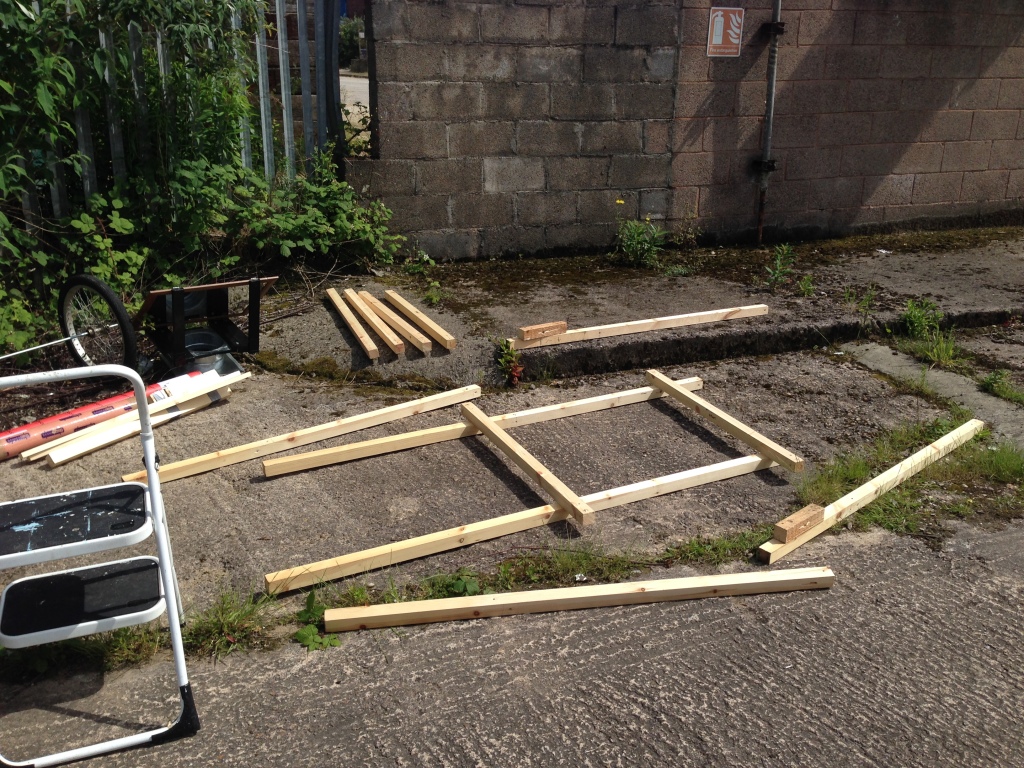 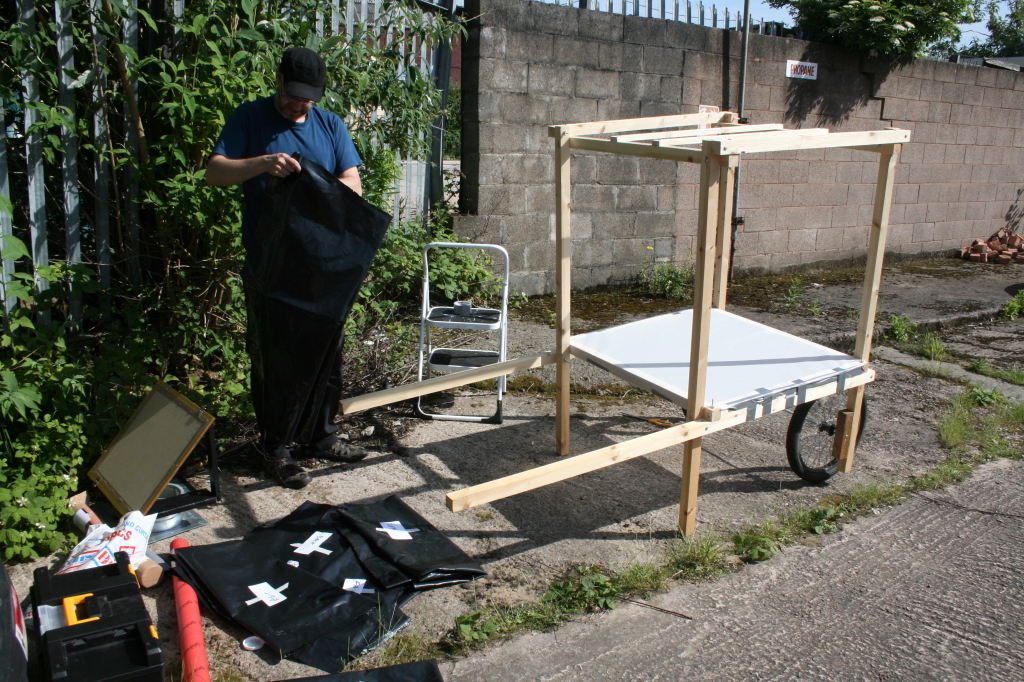 The frame with the projection screen in place. 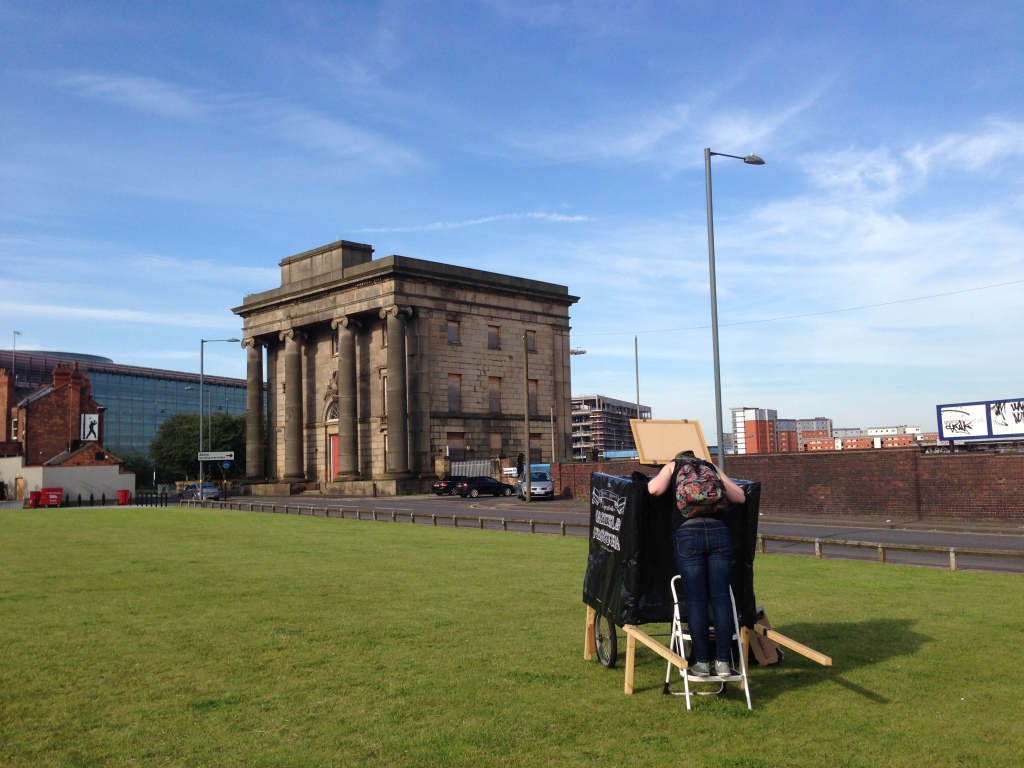 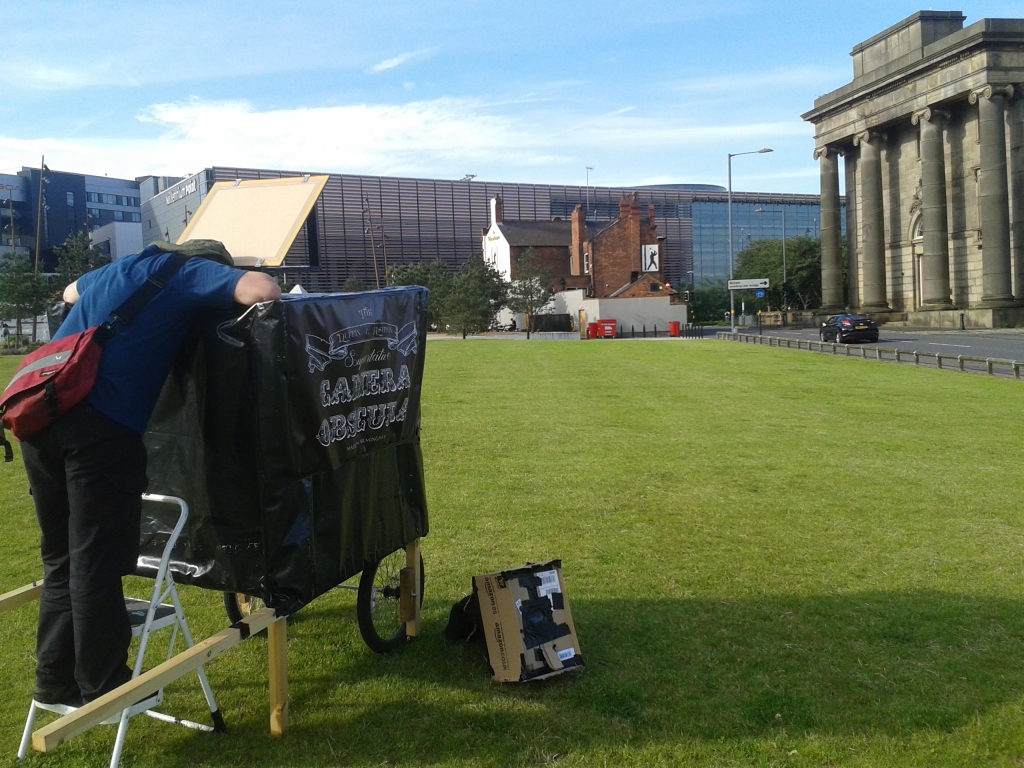 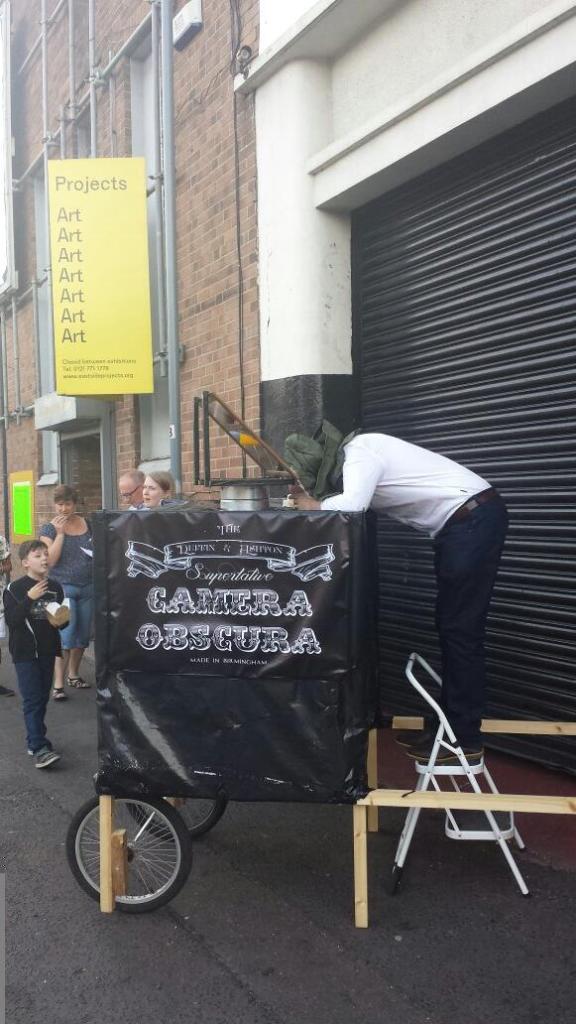 Gavin Wade has a go outside Eastside Projects. (Pic by Mark Cybrum) 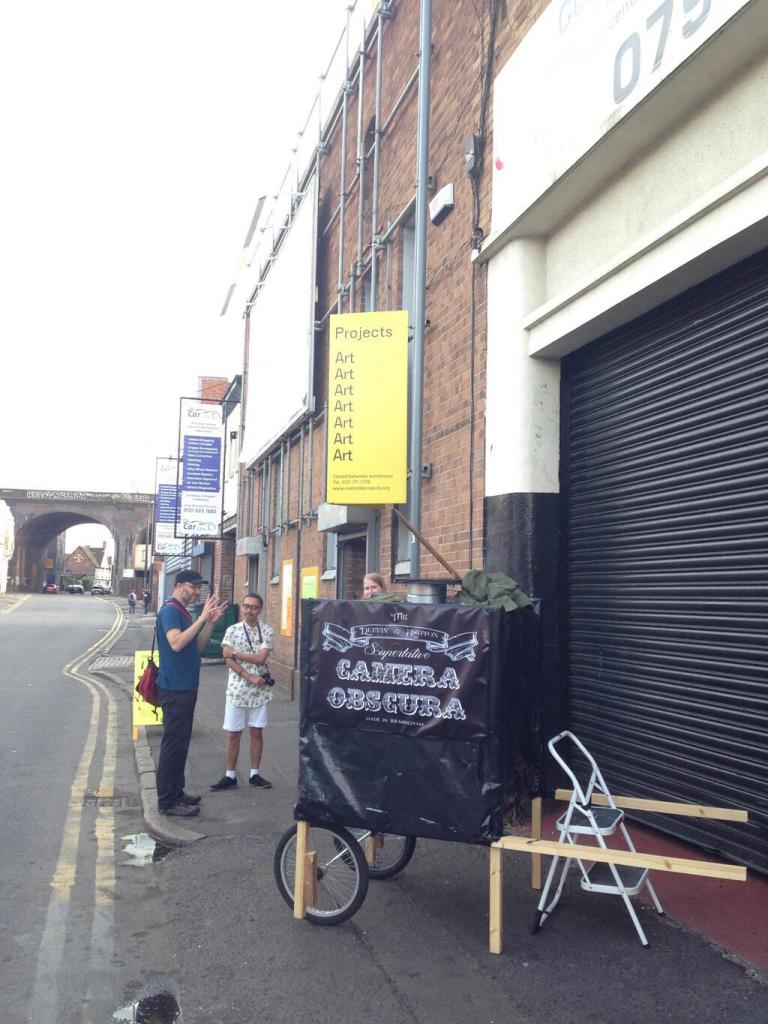 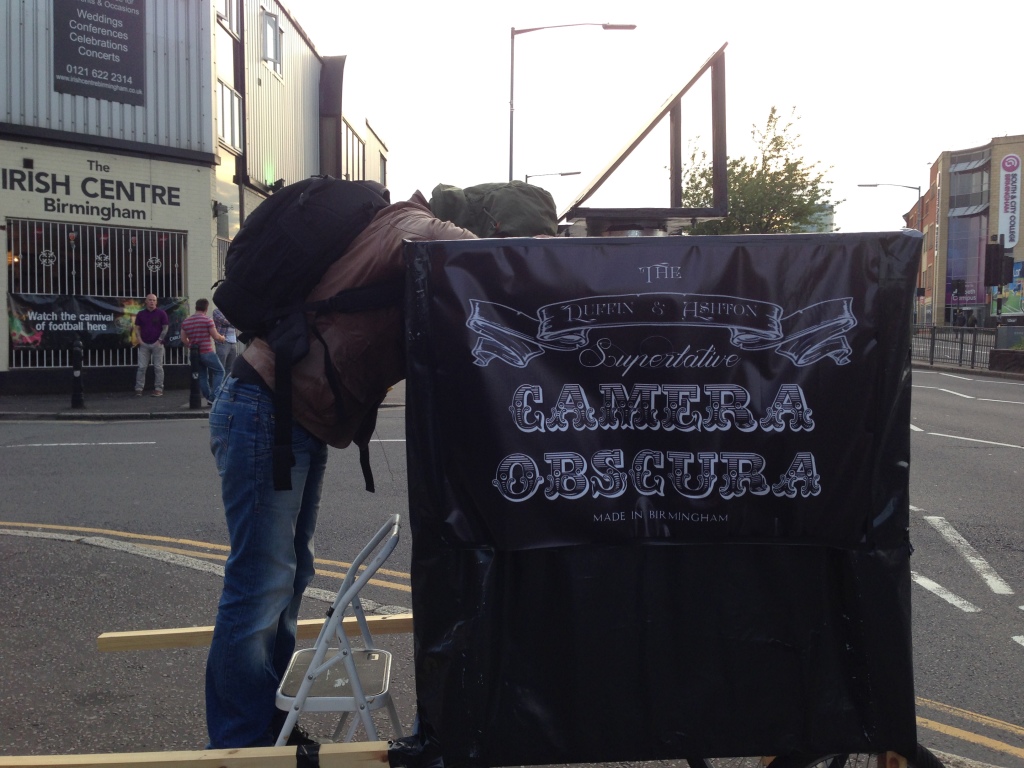 Outside the Irish Centre. 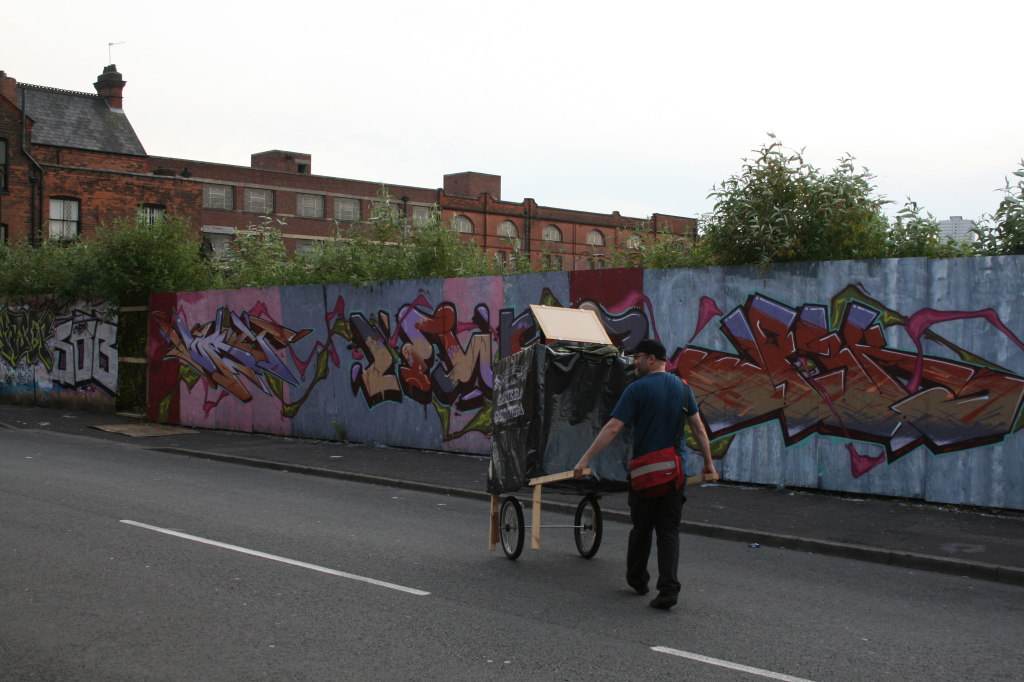 On the way to The Edge.

Epic major thanks have to go to Edible Eastside who let us set up in a corner and Friction Arts who gave us tea at the end. Without you it would have been moidar!