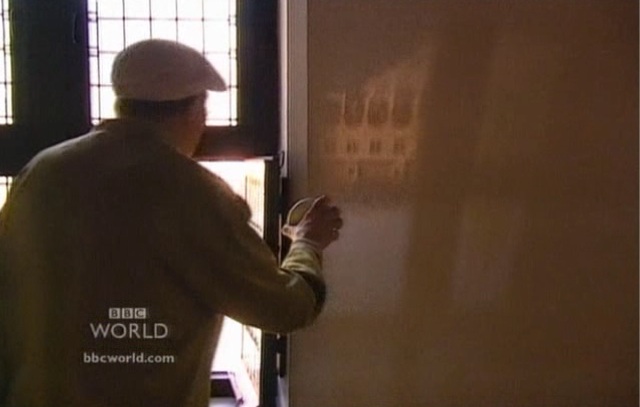 Talk to people about the Camera Obscura, as we do all the time these days, and chances are they’ll mention the theory that Renaissance painters such as Caravaggio used such things to bring realism to their work, so we thought it worth featuring on the blog.

When David Hockney publicised this theory in 2001 it was pretty revolutionary but today it seems fairly obvious. Artists always use the tools available to them to do better work and optics were dramatically improving at that time. That painters would use a camera obscura to achieve things the naked eye was incapable is a no-brainer.

The theory was first brought to the public consciousness in a BBC documentary, Secret Knowledge, which is on YouTube in two parts (one, two) albeit in pretty low quality. There’s no commercial DVD release available but there is a reasonably good quality copy on the BitTorrent sites if you know where to look.

The thesis is fairly simple. Painters were trying to replicate three dimensional reality on a two dimensional surface. They noticed the effect of the camera obscura was achieving this and so set them up in their studios so they might trace their models and get the perspectives and proportions right, not to mention previously impossible things like naturally falling cloth and fixed-point reflections.

From our perspective, the studio Hockney builds to demonstrate this, with lenses, mirrors and curtains, is fascinating and opens up some new directions we could take our project. There’s one scene, for example, where he sets up an actor dressed as Bacchus in a Caravaggio painting. 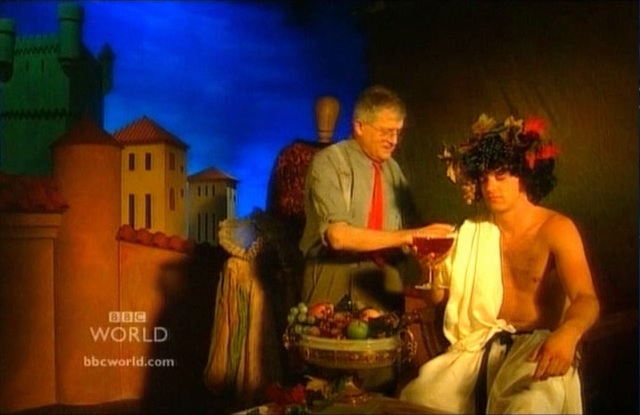 He then moves behind the curtain, literally into the camera obscura (Latin: “darkened room“), where the image of the actor is focussed onto his canvas, and starts to sketch his outline. 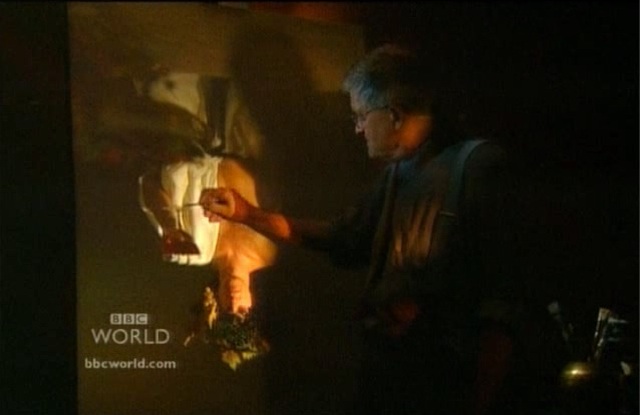 So far it’s just a projection, but then he asks the actor to move and it suddenly gets uncanny. It’s amazing how many people are amazed that the image inside the camera obscura moves. Even when you rationally know that it’s just light from outside it still seems weird to see this flat image behaving realistically. Hockney directing this upside-down ghost has the same effect.

The inside/outside dynamic of Hockney’s setup brought to mind a theatre piece by local geniuses Stan’s Cafe titled The Cleansing of Constance Brown where the set is a long corridor into which actors and props emerge through many doors. There’s a heightened sense of a world behind those doors which we cannot see but which intrudes into our limited view. Here’s some clips:

I started thinking about the camera obscura’s potential as a theatrical stage, of sorts. The audience sits in a darkened space looking at screens onto which the live actors are projected and reflected from unseen bright chambers in the wings. By having multiple lenses and mirrors which can be moved during the show the effect could be really interesting. I wonder if this has been tried before, or if there’s an experimental theatre company or festival in the region interested in trying this out? James? Laura/Harun?

And that was just one idea. The documentary is well worth an hour of your time and the book is published by Thames and Hudson (ours is on order – a review may follow if it warrants it.)