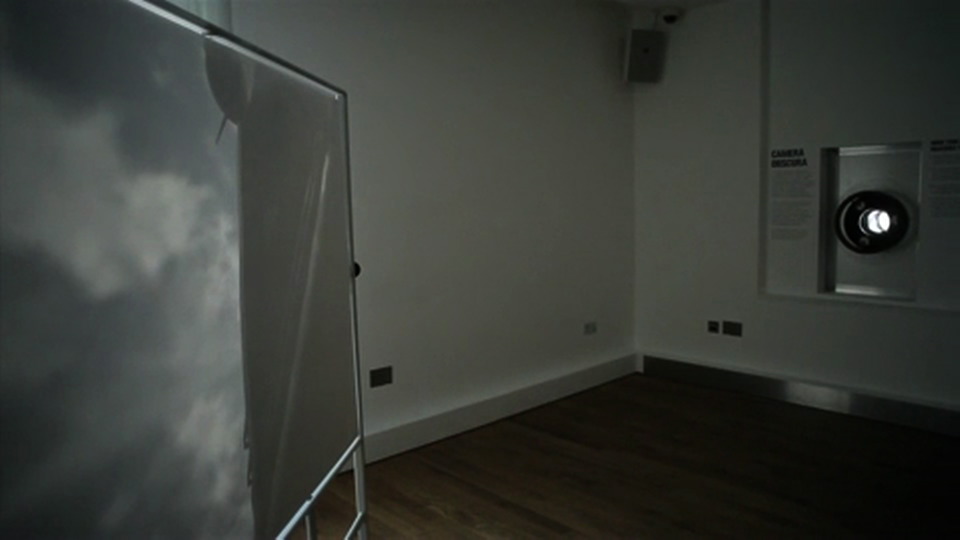 The Photographers’ Gallery in London has a camera obscura and it's a little different from the norm.

Here's their video (taken from this page) explaining how it works and also giving a good historical background.

(I didn't get any decent photos so these gifs are all taken from that video.)

It's interesting to note that even though I watched this before visiting I didn't quite understand what they have there until I visited it myself. But maybe I just wasn't paying attention.

It’s an intriguing set-up that’s different from anything else I’d seen. For a start the lens is embedded in a window and the mirror rotates around a vertical axis. Most cameras, ours included, have the lens in the roof and the mirror moving on the horizontal, but there’s no reason it can’t be done this or any other way.

This sideways look also solves the problem of being on in London building with a view of the brickwork opposite. The mirror allows you to look along the street and see people walking towards the gallery and really does mess with your perceptions.

The other difference is the chamber itself which I was surprised to see is a standard function room of a substantial size. When I first went in I thought the camera would be one of the cupboards but it’s the whole room.

Blackout binds are lowered and the lens projects on to a free-standing screen on wheels which can be moved to focus the image. This was an innovation I hadn’t seen before, solving the problem of integrating a focus mechanism into the lens housing. To focus you simply move the screen, which is also semi-opaque so you can see the image on both sides.

The size and format of the room means you can have a large number of people looking at the camera, which does lessen the intimacy a bit, but also opens it up to new possibilities. This is not a recreation of a Victorian gentleman’s folly, nor an Englightenment drawing tool. This is figuring out what a camera obscura is today.

And ultimately, it’s just a hole in the wall. Always born of simplicity, these things.

Thanks loads to Vikki Jessop for arranging an out of hours look at the camera!