Progress on the new camera has been slow and steady, with lots of small achievements that, in themselves, don't seem worth reporting, because something else small will be done soon so we might as well wait for that before writing an update.

Is our excuse for silence. Let's rectify that.

On Friday April 24th we met with carpenter Matt Moore to measure the optimal focusing length for the camera. With this figured out he set to work building the sides. 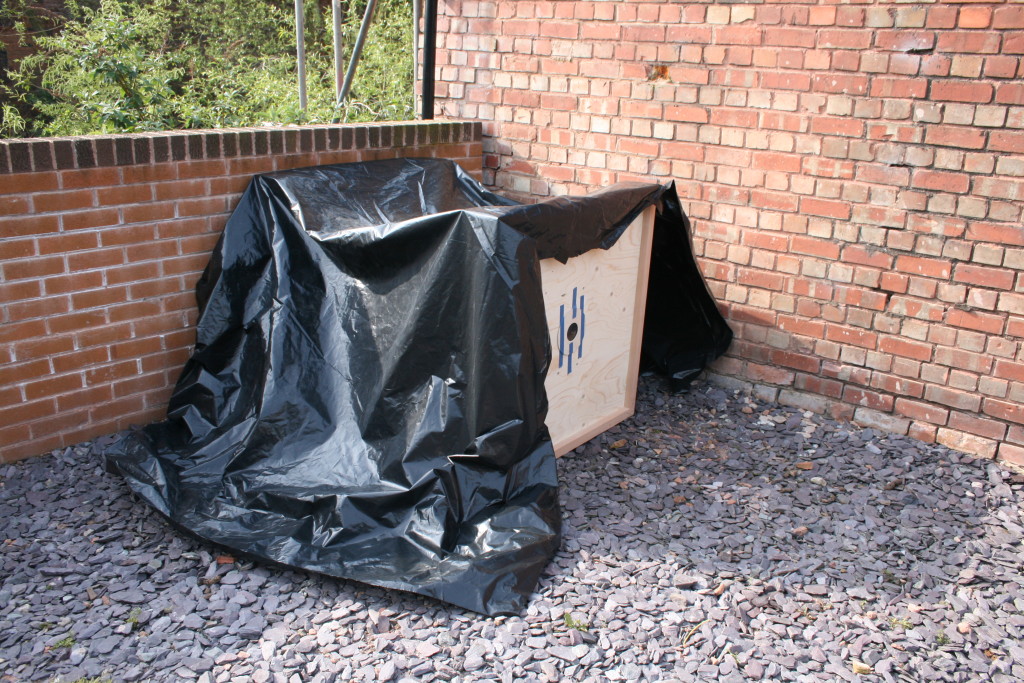 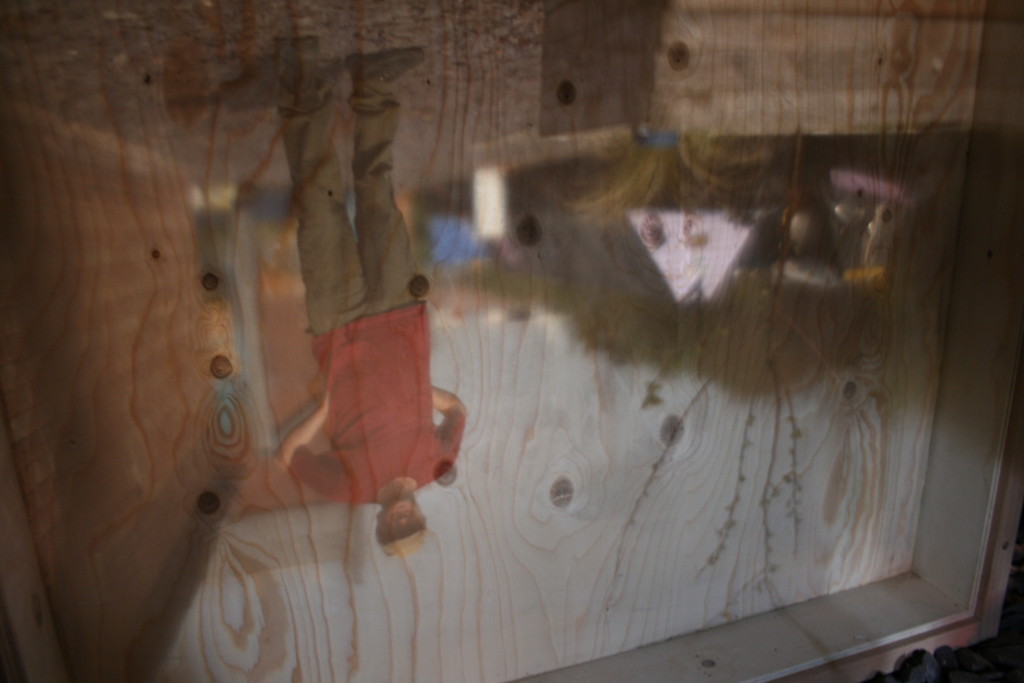 The camera body was delivered to BOM by Matt on Monday 27th April. The pieces are an inch too wide to fit in Pete's Ford Ka, which is irritating, but the Ka is due to fail its MOT this year so it's not a huge problem.

As an aside, Pete's wife occasionally tries to get him involved in looking for a new car, something he has no real interest in. And when she succeeds his only concern is the size of the boot. Will it fit the new camera in?

We built the camera on the stage at BOM and put the lens and mirror on it. It worked. Yay! 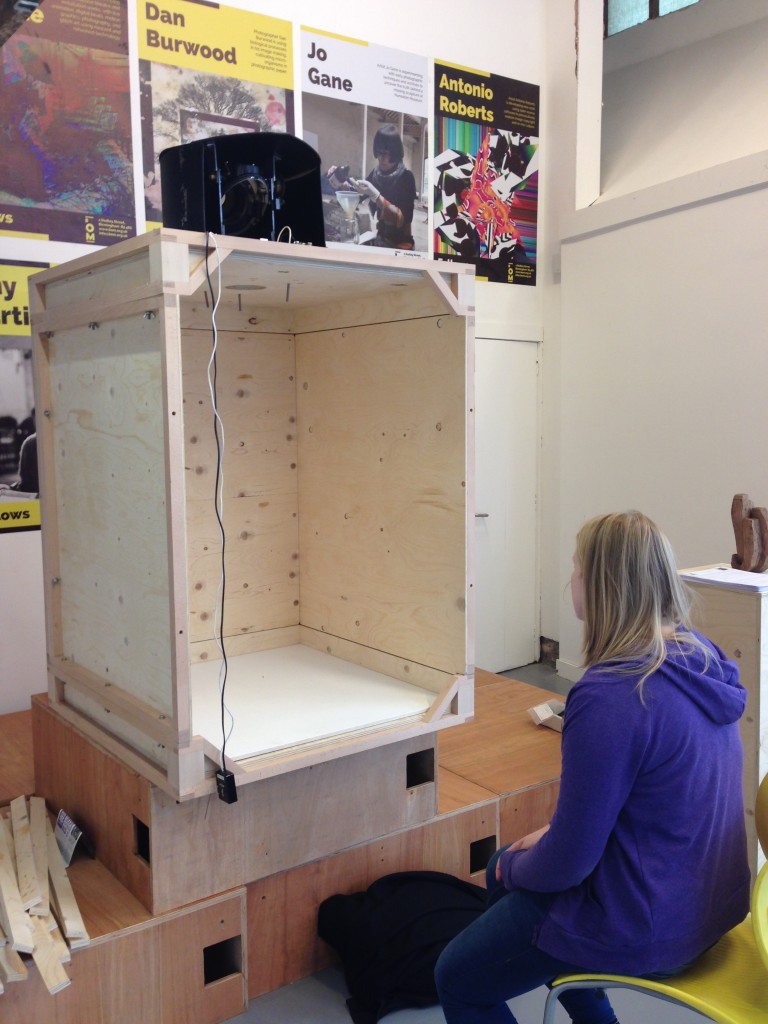 Actually having the camera in front of us was a bit weird. It was exactly what we asked for but not exactly what we expected. Having an idea actualised by a third party is always an odd experience and this was no exception.

The next Friday we decided to stay away from BOM and the camera. We spent a few hours at the MAC, walking around the park talking about what the hell we were doing with this bloody big camera. The last year has been pretty momentous for both of us in different ways and we're not the people we were when we first built a camera in Pete's garden. Without going into details it was a good session and we're ready to move forward.

Focusing was the next problem to solve and we spent a long time looking at jacks and lifts, none of which were suitable, until we stumbled across a Fisher Laboratory Scissor Jack on eBay for £30, not bad considering they cost £200 new. It's wide enough to hold the metre square screen and subtle enough to enable perfect focusing. It's a dream!

(In a camera obscura, where the lens is fixed to the roof, focusing is done by raising or lowering the screen. It's much easier than raising the roof!)

Last Friday (you'll notice we tend to do Obscura work on Fridays) we started painting the box. Matt black for the insides and varnish on the outsides. Having had the box built in Matt's workshop it was good to be doing some "making" rather than planning at BOM for a change. 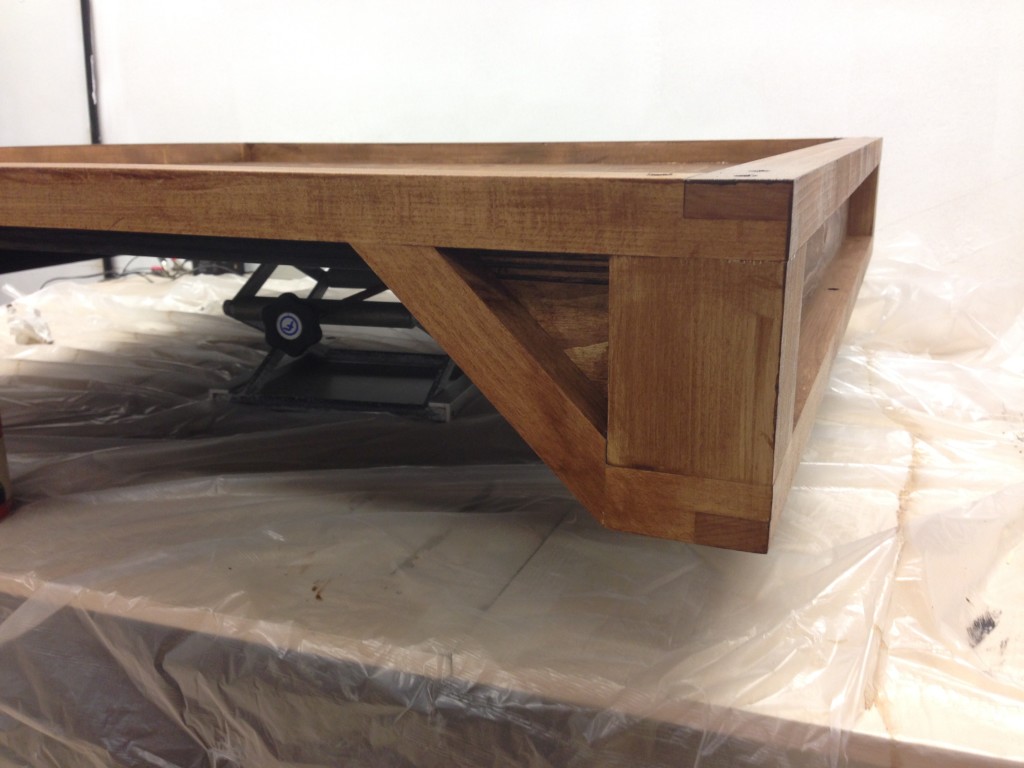 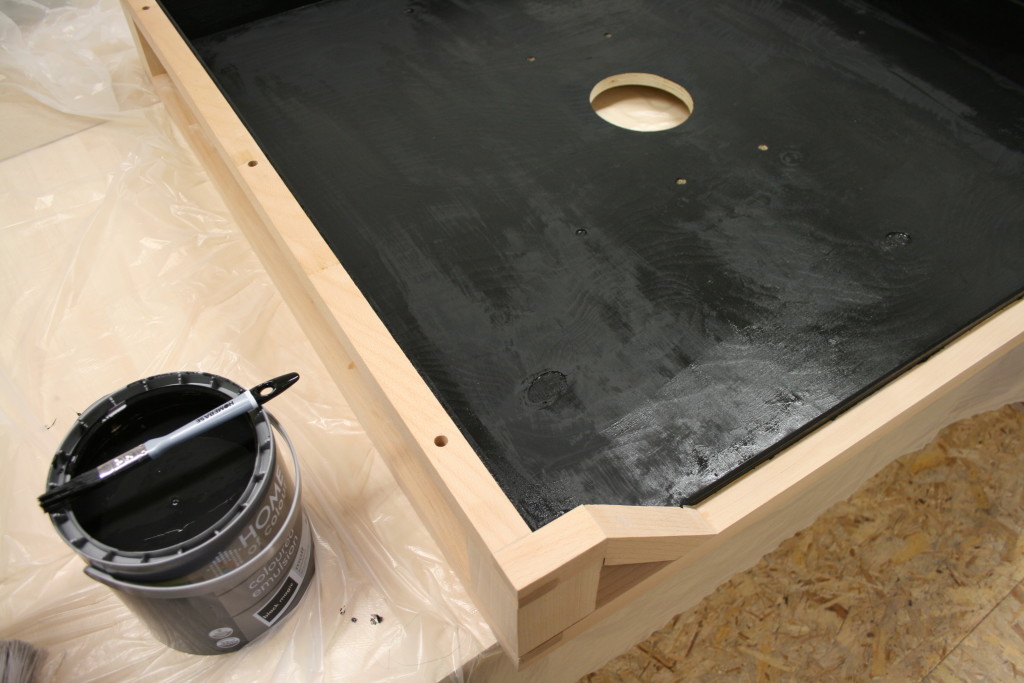 With everything painted, and looking quite splendid, we put the box together again today and started working on the blackout. This is something we'd never figured out in the planning, deliberately waiting to see what the camera was like first. There are a surprising amount of options for this, from pleated curtains to shower rails to conical flaps. Eventually we went with a large sheet, currently of black plastic, which is fixed to the top of the camera and falls to the ground where it can be pegged in or left loose. We're going to some advice from Matt on how to make it look as good as the camera itself (currently it's a bit of a Pete special) and then we'll be ready to go. 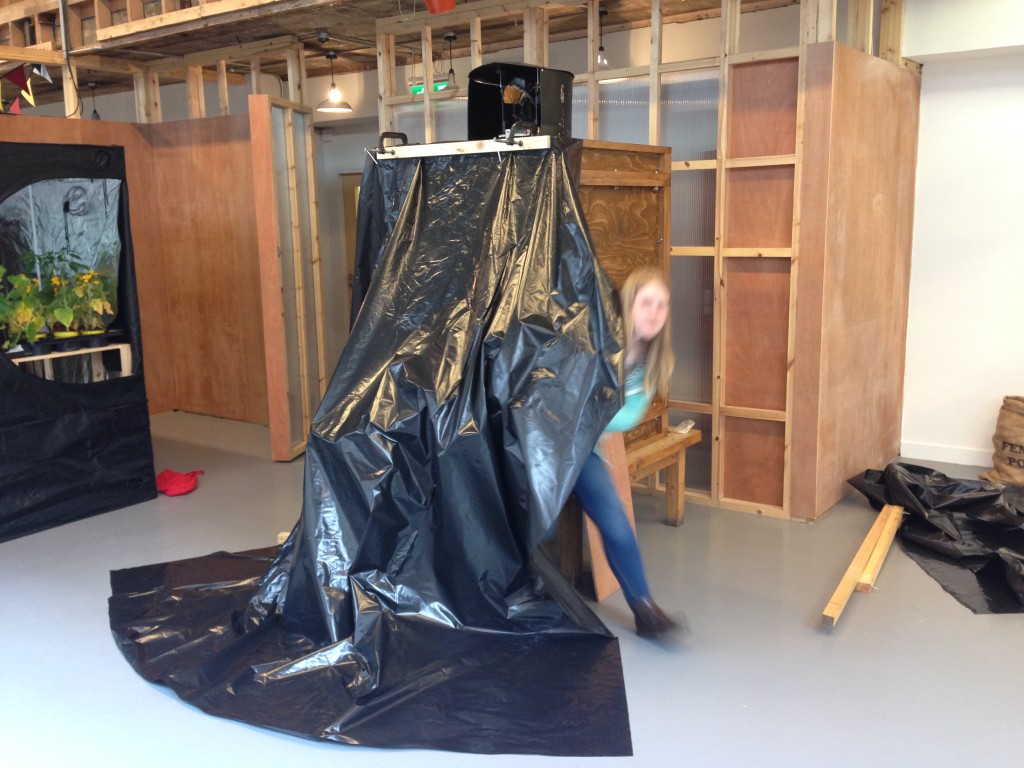 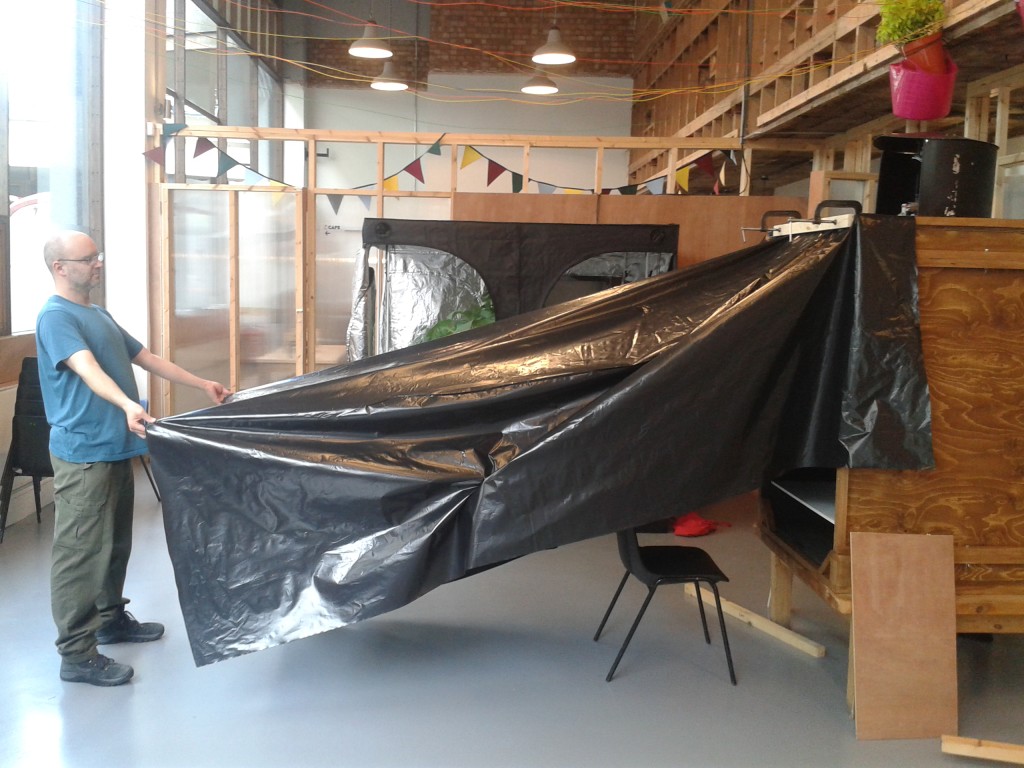 You might have noticed we haven't mentioned the wheels. One of the things we really wanted to keep was the portability of the old camera – to be able to wheel it around like a barrow and point it at anything. The new camera is just too heavy for the wheels we had in mind so were going to postpone this until we have the funds to get something made that will be stable and manoeuvrable, not to mention safe.

In the meanwhile the camera will be stationary. It's still portable in the sense that it will fit in a car and can be erected in about 10 minutes, but once it's up it's up. True portability will be a 2016 project.

With the camera nearly ready we're planning to give it a public test run at Digbeth First Friday on June 5th. Check the Twitter for our precise location.

Then throughout June we'll be turning the camera into a spectacular attraction for all the family in time for its first professional appearance at CoCoMad in Cotteridge Park on Saturday 4th July.

And from then it begins! Birmingham will have a camera obscura! Woo!